Tattoo: A Personal Story or a Fashion Accessory? 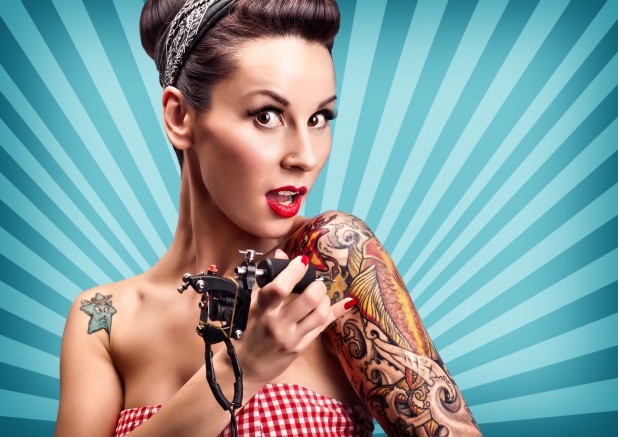 About a week ago I was absolutely excited about getting inked and I got the tattoo of my dreams. I was bragging about it a few days ago in the office and the comments I got were… well, not so good. I was completely shocked that the people I worked with made me feel like a mindless zombie for “just following the latest fashion trends”. Never mind that the tattoo had a deeper meaning to me, they all believed that it’s just a fashion accessory. So, I started thinking, when is a tattoo perceived as a personal story and when as a “product” of the latest fashion trends.

With modern art and the freedom to express ourselves through it, people are becoming more open to the idea of body art nowadays.

The art of tattooing has become a mass phenomenon but far more than that, tattoos tell personal tales and create a sense of identity encompassing a sense of belongingness. You could see a lot of people getting tattoos all over their body – on their wrist, ankle, arm, on their backs, and even on the most peculiar places, like their eyes – It’s all over, literally. But don’t be easy to judge, some tattoos bear significant meanings and are not a mindless act of following the latest fad. A simple bird tattoo could mean hope and freedom. But how on earth would you know it means something? Is it the location of the tattoo? Is it the tattoo itself?

How would you know the difference of a fashion statement tattoo and a tattoo that has a significant or personal meaning?

Tattoos come in different looking designs – all shapes, forms and sizes. It could either be something reminiscent of someone who has greatly influenced you like a portrait; it could also be a symbol, or a quote you live by, and much more. It really comes down to your personal preference. And as I’ve said, we wouldn’t know how to figure out if a tattoo has a tale behind it or not unless you ask the person. Location is not important if you’re trying to figure out if it has meaning or not. Why? Having a dream catcher tattoo on your back doesn’t necessarily have to mean that you are trying to put the bad thoughts behind. It could just be another ordinary tattoo. But then again, location is important for some tattoos, like the breast cancer ribbon. The pink ribbon is usually placed on the chest or upper rib area of a breast cancer patient to symbolize all the struggles the patient has gone through. So, if you see one, you know what it means.

The tattoo itself does matter if you’re trying to figure out if it has meaning or not. People nowadays have random tattoos – we can’t judge them for that. But try to analyze when you see one, it could have a deeper meaning. There’s no difference if it’s a fashion statement or not. Why? Whether it’s a fashion trend or not, it’s still inked permanently on your skin; so why do people get inked? People believe that their body is an empty canvas and they can do whatever they like with it. Some fill this canvas because they have a story to tell, while others fill it with tattoos that look pretty.

Having a tattoo doesn’t mean you’re just following the trend – but people will probably think so.

It can look like a fashion trend in most people’s perspective because almost everyone has some sort of a tattoo. First, people would think you got it just because of the current trends. Second, they’d think it’s just another tattoo. Third, it can look sloppy or classy depending on how you carry yourself. Of course, that’ their opinion. You know the meaning behind your tattoo but people don’t. What really matters is your opinion and your perspective not other peoples perspective.

And for the people who judge tattoos, try asking first. You might make fun of a tattoo that symbolizes someone’s mother. You’ll feel ashamed in the end and I think you wouldn’t like that. It sucks. So, don’t you dare judge before asking. And yes, it does matter if you ask or not. To others it may look confusing, but really… does it matter whether one’s tattoo is a personal story or a fashion accessory?